When I was little, I hated dogs - big, little, it didn't matter.  Growing up in the city, I was never exposed to animals like farm kids are (except for a pet cat that was only with us for a short while) and therefore grew up being unsure of them.  My children, who now live on a farm have asked me, "Mom, when you were little, didn't you wish that you could live on a farm?"  I laughed, "Nope.  It never crossed my mind."  Because of my husband, who grew up on a farm, and my children, who love animals, I have grown accustomed to farm life.  I don't think I would ever want to be without animals now, but my reasons are probably different than my children's.  I like the farm fresh eggs, free-range chicken, and raw goat milk. :)   And I have actually become friends with my animals too. Especially my dogs!

I remember the day we went to a farm to pick out our Great Pyrenees guard dog, Jackson.  We had only been living in the country for about 3 years.  We had just bought some lambs, but I still was not used to having animals around.  As we walked through the barn where all the puppies were, the bitches, who were in the stalls with their puppies, were not happy that we were intruding on their privacy. Being good guardians, they stood with their front paws over the gates, barking and growling ferociously - scared me to death!! As I watched these dogs, I thought to myself, "And we are going to take one of these things home with us?!?" I was so worried that I would be scared to death of my own dog. 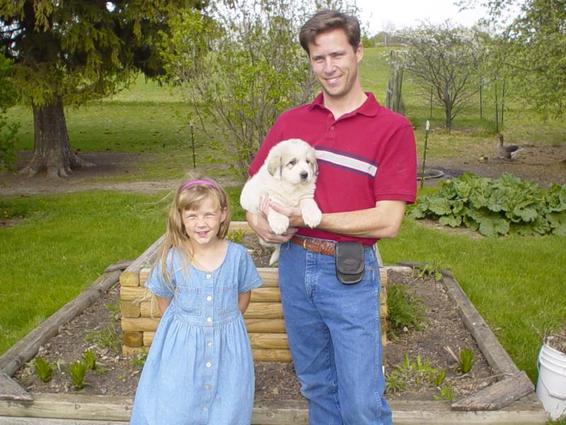 Mike and Emily the day we got Jackson.
Well, I am happy to say that Jackson has become one of my best friends. ;)  He is truly a delight in every way.  He guards me with his life and follows me  wherever I go.  He lets me know when people are around, which is a wonderful thing when you live in the middle of nowhere.  He also gives me a 3 minute advanced warning that a car is coming up the driveway.  The UPS man never gets out of his truck when he comes because Jackson lets us know that he is coming when he is still half a mile away.  By the time he is in the driveway, we are waiting for him there. :)

When we are in one section of the house, often Jackson is outside the window, guarding us.  He likes to be wherever we are not only because he is protective, but also because he is very social. 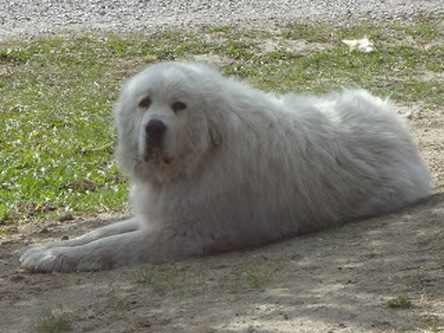 When you have a lot of land, it is easy for your kids to get out of sight. So if  I want to know where they are working or playing, all I have to do is look for Jackson.  He is always watching over them. 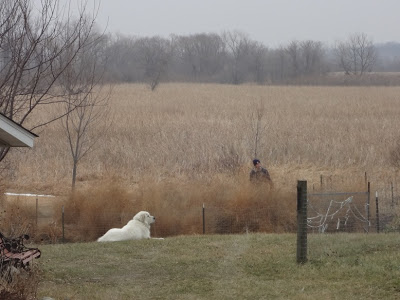 In this picture, you can see Mike working in the garden and Jackson on the hill watching over him.
Pyrenees have a reputation for being a door mat.  Jackson is no exception.  Almost every night, he sleeps on the porch mat in front of the door, always there to keep us safe.

One thing I absolutely love about Jackson is that he is not obnoxious.  I can't stand yippy dogs that jump all over you (really...I just don't like any other dogs, period).  Jackson never jumps on people.  Jackson will bark like crazy if people or cars are around, but he is respectful and friendly once he knows that they are not going to harm us.

When Jackson was a puppy, we would walk our property lines with him. That way he knew where his territory was.  We were warned that he may leave his territory when he was ready to find a gal, and that he did.  He was gone one day for 10 hours.  We didn't know if we would ever see him again.  But we prayed, and he came back.  The next day we got him fixed, and he has never left again.   The only time he will leave our property is if he sees us all leaving - not in a car, but on bikes or four wheelers.  So there have been times where we had to  tie him up to keep him home, but as long as one person stays behind, he will stay to guard.

Jackson also does a great job keeping all of our animals safe.  We have lived on our property since 2001, and there have only been a  couple times that we have lost animals to predators.  We hear coyotes almost daily, yet we have never lost a goat, a sheep, or a chicken to one.  I remember one night when we heard coyotes very close to the house.  The howl stopped my heart!  But we knew that Jackson would take care of it.  In the morning there  was fresh snow, so after breakfast the kids and me went out in search of tracks.  We found tracks all over.  As we followed them away from the house and out into the slough, I looked up and saw something running around in the brush.   I freaked out thinking it was coyotes!  But no, it was our sheep.  As we made our way to the barn, we found coyote tracks every where.  Our sheep were running  around all over, and their gate was open.  Inside their pen there were more  coyote tracks, but none of them were hurt.  I wished I could have seen what took  place out there that night; it must have been quite a sight. What a great guard  dog!

If you have a farm, you will love the fact that Pyrs don't chase chickens like most dogs do.  As puppies, they may chase them out of curiosity,  but that won't last long.  One time, a couple of years ago, I was out at the barn, and I saw Jackson get up and go tearing after the chickens.  I  was shocked!  He had never in his life chased them before.  What was going on?   I started getting discouraged thinking that maybe in his old age, he was losing  his instinct to guard them.  Then as I walked around the chicken coop I saw him  there drinking from the big pan of milk we had set out for the chickens.  The chickens love the extra milk when the goats first freshen in the spring, but I found out that day that Jackson likes it even more than they do. :)  He was guarding his milk from the chickens! :)

Not only are the animals safe, but so are our gardens.  We are surrounded by farm land and wildlife habitat, but Jackson keeps the deer away from the orchard and out of our gardens. Before we got him, the apple  trees were always getting chewed on by the deer.  Now we have a large orchard  with all kinds of fruit trees and enjoy plentiful harvests.

Another benefit to having a big guard dog, especially for women who can feel vulnerable when alone in the country, is that people are afraid of him.  For most people  the fear only last a few minutes because we are there to assure our dog that  they are good, friendly people.  Once Jackson knows that, he will be totally  fine with us having 100 people over.  But there was one time I felt really bad  for a fearful visitor.  The children and I were eating lunch, and Jackson set  off his alarm (a certain way he barks when a person or car is here), so I knew a  car was coming up the driveway.  Seeing a delivery van, and thinking about the  fact that my husband was out of town,  I told the kids, "He can leave the  package on the porch, let's finish lunch."  So we continued eating and Jackson continued barking.  Some time passed.  Finally I made my way to the entry to see  what this person was doing.  I noticed that the van was unmarked.  Hmmmm...who  was in my driveway?  The van just sat there and nobody got out.  I began to get nervous.  Was this person stocking the place, thinking that nobody was home?  I  waited and waited, and nothing happened.  Finally I called for one of the kids to bring me the phone.  Now I was beginning to shake.  What should I do?  Call  911?  I waited a little longer and then decided to call.  "Hello, ummm, there is an unmarked van in my driveway and nobody is getting out, and I am not sure what  they are doing here",  I said.  The guy asked me a few questions, and I made my  way to the second level window to get a better look.  Then I saw the sliding  door on the side of the van open very slowly.  I explained what I was seeing to  the man who took my call.  Very cautiously a man stepped out of the van and  began frantically looking around. "I think he's stalking the place!"  I said  nervously.  Then he reached into his van, grabbed a package, and after another  quick look around, made a mad dash for my porch.  He threw the package on my  porch, turned around, and ran rantically back to the van, threw open the  drivers door and quickly jumped in. Then he reached back and promptly closed  the sliding door.  Feeling completely embarrassed, I said with a chuckle, "Oh, I  guess the guy was deathly afraid of my dog, sorry". :)

Pyrenees are also very good at discerning the character of people.  There are certain people that  Jackson just does not like and over time, as their character is revealed to us,  we understand what Jackson knew all along - they were up to no good!  So I have  learned to take notes from my dog. :)

I could go on and on about how  wonderful our dogs are, but I guess the proof of my love for them speaks loudest  in the fact that our family is now breeding Great Pyrenees.  Me, a woman who  grew up hating dogs and afraid of every dog I ever knew, breeding dogs?   Obviously that speaks volumes!

In my opinion, Great Pyrenees are the greatest  dogs ever! :) 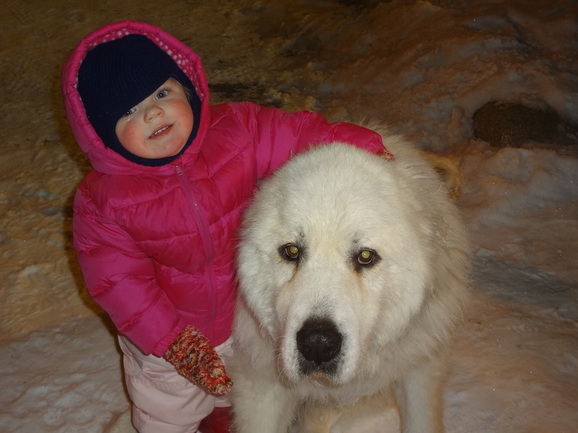 Jackson with a little friend :)